Monster of the Week -- The Great White 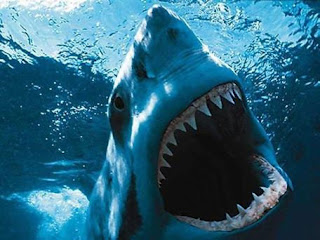 Few things can invoke an instant image as when someone starts the familiar "duh dun, duh dun, duh dun" of the Jaws theme song (or my favorite, the Mr. Jaws spoof song). Like nothing prior or even after, especially Orca, Jaws made people afraid to leave the sandy beach and take more than a couple of steps into the water. I readily admit, when I can no longer see my feet, even momentarily, I turn around and head back. Swimming or surfing in it? Not this chica. Just not going to happen.


While I was too young to see the original in theaters, I fondly remember my mom recounting the story as she and my dad went to see the movie with another couple. Upon the first of many terrifying scenes, the ladies promptly sent popcorn and Coke flying. Still it makes me giggle thinking of dad covered in that sticking mess and nothing he could do about it, because of course, it had been his idea.

Recently I have become a fan of Expedition Great White on the National Geographic Channel. Aside from the astounding scientific leaps they are making, we are treated to the visual feast that is Paul Walker from time to time. Just one episode is enough to make you realize why the reality of this ferocious predator as a movie monster is still the viable. They are both magnificent and terrifying at the same time. I'm not really sure what I think about rumors that there is another Jaws film in the making, this time with Tracy Morgan at the helm. While I respect his comedic work, it’s hard to imagine anyone better than the original cast. Thank you, Roy Schneider and Richard Dreyfuss, for steering the way through one of the scariest movies of my youth. Out of respect for the teeth, I will give the redo a chance.
Posted by Queen of the Universe at 2:19 PM

Email ThisBlogThis!Share to TwitterShare to FacebookShare to Pinterest
Labels: humor, Monster of the Week, Queen of the Universe

Queen of the Universe
In a very hot place, Texas, United States
Writer, local funny girl, kick ass mom, foodie and film nerd. I am fortunate that I get to do what I want. Sometimes I write for children, sometimes for grownups. I royally piss people off or mildly amuse them. Anything in between wouldn’t be very interesting. I am making my happily ever after up as I go. Come on, you know you want to, so do it!